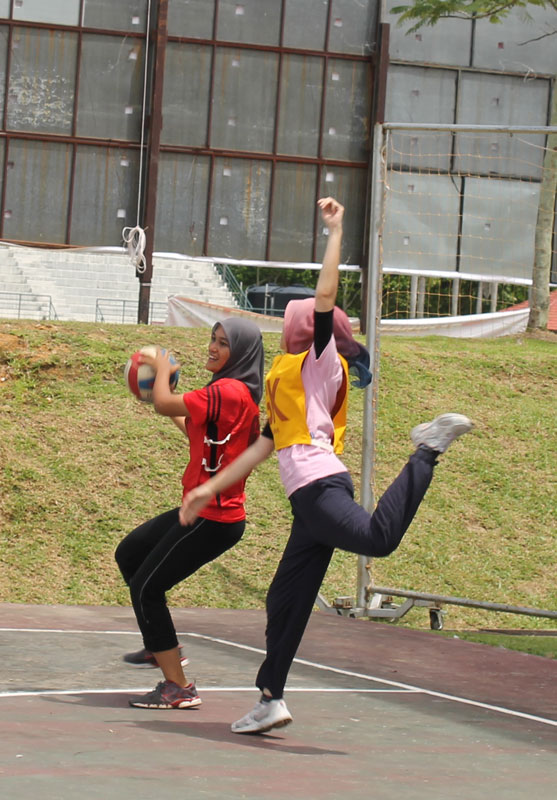 WEDNESDAY, 12 JUNE – The Netball Championship among schools in Universiti Malaysia Sabah (UMS) was successfully held and saw the champion trophy kept by the School of Education and Social Development (SPPS). The championship which was held at the EcoCampus University Sports Complex saw SPPS team consisted of students from the Sports Science programme defeated the team from School of Business and Economics (SPE) at the Finals with a score of 9-4, thus bringing home the challenge trophy, medals and hamper.

Earlier, SPPS team at the Semi Finals trounced the School of Engineering and Information Technology (SKTM) with a score of 8-2, which was then followed by SPE team with their win over SPS with a score of 11-8. In the deciding match for the third placing saw SKTM beat SPS with an aggregate of 9-3.

At the initial competition which involved a league match saw SPPS taking the top spot in the Group A whilst SKTM took the top spot for Group B and SPE for Group C. The three groups had won all competitions in their respective groupings.

Sports Science lecturer, Dr Mohamad Nizam Nazarudin expressed his satisfaction and felt proud of his team’s success in retaining the champion title every year, at the same time urged other teams to improve their play.

The closing and prize presentation was done by the Deputy Vice-Chancellor of Student Affairs and Alumni UMS, Assoc. Prof. Datuk Dr. Hj. Kasim Hj. Md. Mansur. The championship which was participated by nine teams among others aimed at encouraging students to make sports as a culture and healthy lifestyle in line with academic achievement in producing healthy students. – FL