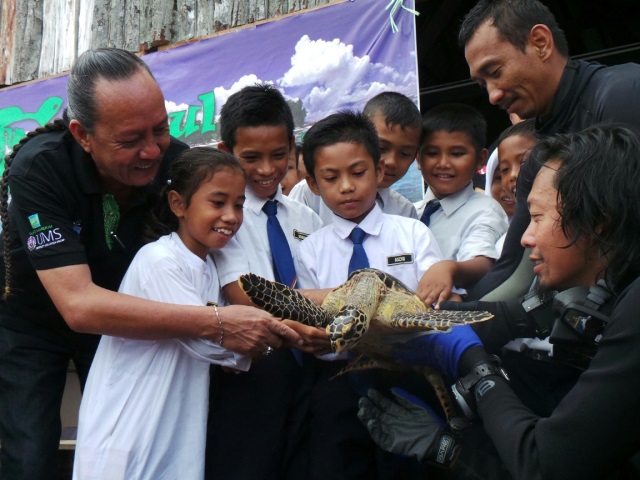 FRIDAY, 24 MAY – A turtle conservation programme in conjunction with World Turtle Day 2013 celebration was held at Mabul Island, Semporna and received good response from locals and foreigners.

The two-day programme was a collaboration effort among Universiti Malaysia Sabah (UMS), the Ministry of Tourism, Culture and Environment and the Sabah Tourism Board through Sabah Parks and the Widllife Department and Uncle Chang’s Sipadan Mabul Dive Lodge.

Asisstant Minister of Tourism, Culture and Environment, Datuk Pang Yuk Ming said the turtle conservation programme was a small product which would attract tourists to that area especially to the districts of Semporna, Tawau, Kunak and Lahad Datu.

“Turtle species are touristic icons which should be appropriately developed because Sabah is known worldwide for its diving centre activities,” he said to newsmen after launching the programme which was participated by volunteers from in and outside the country. According to him, his ministry supports the efforts in turtle conservation as it is seen to be able to increase public’s awareness towards the sustainability of turtle population in Sabah.

Meanwhile, Senior Lecturer at UMS Borneo Marine Research Institute, Dr. Pushpa M. Palaniappan said about 700 green turtles and hawksbill turtle were tagged for the purpose of research around the areas of Mabul and Sipadan Islands.

“As of now, 150 turtle have been tagged at Mabul Island and 535 at Sipadan Island which are estimated to be between eight and 20 years old,” he said. Also present at the function was the Deputy Vice-Chancellor (Research and Innovation) UMS, Prof. Dr. Shahril Yusof. - FL