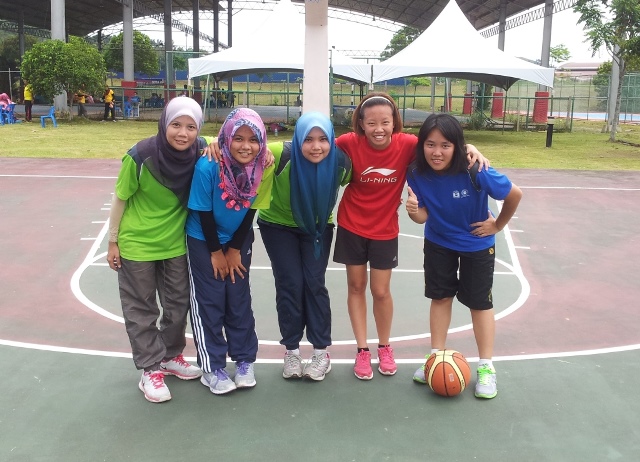 FRIDAY, 17 MAY – The Women Basketball League organised by Universiti Malaysia Sabah (UMS) for a month ended with a stiff competition recently.

Five teams represented their schools namely the School of Education and Social Development (SPPS), School of Medicine (SPU), School of Psychology and Social Work (SPKS), School of Science and Technology (SST) and School of Food and Nutrition (SSMP).

SPPS team emerged champion when they defeated SPKS with a total score of 36-2. SPPS took the lead when they trounced SPKS with a score of 28-2, as early as the first 10 minutes. The score placed them on the second spot whilst SST captured the third spot.

In the meantime, the head of SPPS team, Tho Wan Jun said she was satisfied with their involvement in the league this year as they were not able to participate last year because of lack of players. They were lucky this year as more students from the Sport Science Programme participated.

One of the SPPS players, Melvina Marvin Chong said their involvement in the Women Basketball League were the firsts for many of the players. However, under the coaching of lecturers such as Dr. Mohamad Nizam Nazarudin, Pathmanathan K. Suppiah and Hasnol Noordin, had enabled them to increase their fitness, discipline and spirit eventually leading to their win.

The prize-giving ceremony at this championship which was aimed at picking new talents was done by the Deputy Vice-Chancellor of Student Afffairs and Alumni, Assoc. Prof. Datuk Dr. Hj. Kasim Hj. Md Mansur. – FL