Sports, Closing the Gap between UMSKAL and Local Communities 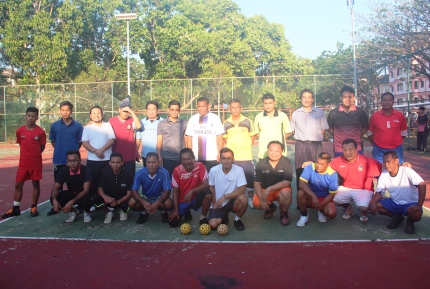 UMSKAL Director, Assoc. Prof. Dr. Murnizam Haji Halik, said that sports is seen by the university as one of the approach in ensuring good relation established with the local communities will be continuously.

He added that the university, including their lecturers, officers and students are requested to organize more programmes that will involve local communities in the Federal Territory of Labuan.

“UMSKAL will hold various programmes to close the gap between the university, leaders and communities,” he said.

Dr. Murnizam also mention that the approach was taken in–line with UMS Vice-Chancellor, Prof. Datuk Dr. Mohd Harun Abdullah, who wish the university to close the gap with the community, including local leaders by having community programmes such as sports, gotong royong, and also social and religious programmes.

He also expressed his thanks to the local communities and leaders for their supports and cooperation in ensuring the university’s programmes a success; including both cultural and religious programme.

Dr. Murnizam also welcomes any collaboration in organizing programmes involving students and the villagers. These programmes will ensure the students to know more all 27 villages in the Federal Territory of Labuan.

“UMSKAL had organized a few Corporate Social Responsibility (CSR) programmes with local communities in making sure the university to keep on relevant to the locals,” he added.

UMSKAL as the only public university in Labuan want their existence to benefits the free duty island communities.

Kampung Sungai Miri emerged Champion and first runner-up in the tournament, while the student was in the third place.