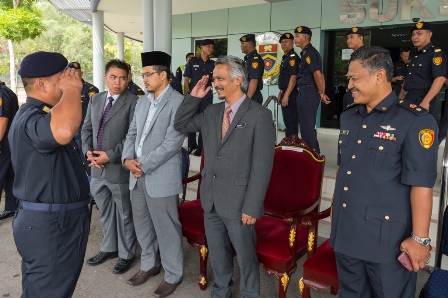 MONDAY, 23rd MARCH – Basic Auxiliary Police Training Series 1/2015 are able to form a high self-discipline level among officers in Security Division, Universiti Malaysia Sabah (UMS).
UMS Acting Registrar, No’man Haji Ahmad said it is important for uniform forces like our security officers to practise self-discipline in their daily task.
“This course aims to upgrade the security level in our campus, and also helps to form their personality through team spirit practised during their training period.”
“Thus, will help in producing better quality work in the future,” he added.
He was quoted during ‘Majlis Doa Selamat Anggota’, prayer to ask for blessings, to mark their Basic Auxiliary Police Series 1/2015 Training held in SUKSIS Building, UMS this morning.
He also prays for every security officers’ safety, and perseverance in their upcoming challenges and tests ahead.
Met by the media representative, one of UMS security officers, Rostam Marinsan said he was grateful and excited to be among the first chosen officers that will attend and completed the training.
“During our absence, we hope that both UMS communities and our family will always be safe and protected from any calamity,” he said.
During the ceremony, No’man took the salute from officers involved as a symbol of discharge of duty for them to attend the training. Present during the ceremony were Head of Security Divison, Lt. Colonel Abdul Talib Arifin and Director of Islamic Centre, Dr. Muhamad Suhaimi Taat.
-SM&MA-
Â
Photo: Musaab Umair, BPK
Media and Citra Division