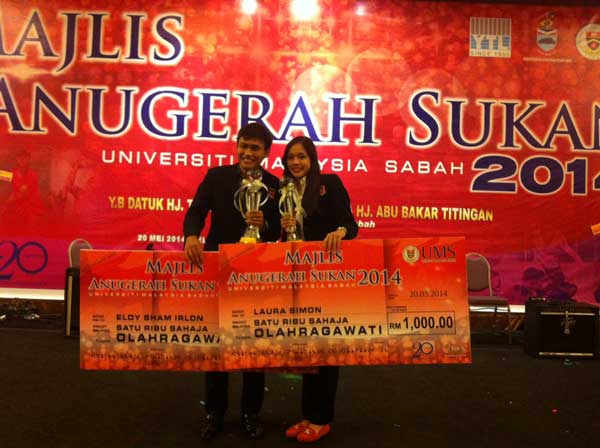 Both were selected as recipients of the awards for their outstanding achievement in their field of sport.

For Eldy, his prowess in the 400 meter hurdles was to be proud of. His achievement in snatching gold in the Higher Education Sports Championship (SUKIPT) 2014 and another gold in the Malaysian Universities Sports Competition (MASUM) 2014, besides being the Sportsman at Inter-UMS schools had qualified him to win this award.

Laura’s agility in the Epee Fencing event made her the only female athlete to qualify for the Sportswoman award. She was the gold medalist of the event in SUKIPT 2014, Sukan Malaysia (SUKMA), Hong Kong Open and Shenzen Open.

Both received a trophy, blazer, certificate and cash prize of RM1,000 each.

In the meantime, the KATA UMS Women team was hailed as the Best Team award recipient, whilst Jesyntha Chong Yee Shim won the Coach of the Year award.