Workshop On Formulating of MyCPD Held 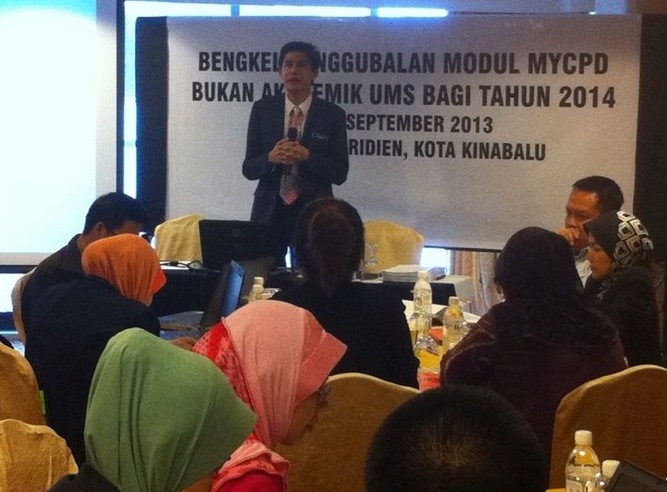 FRIDAY, 13 SEPTEMBER – A workshop on Formulating of MyCPD Module for Non-academic Staff For the Year 2014 organised by the Training Unit of Universiti Malaysia Sabah (UMS) was held for two days beginning yesterday at the Le Meridien Hotel, Kota Kinabalu.
The workshop which was attended by selected non-academic staff members who represented their particular schemes was aimed at formulating and revising the present modules and to include new modules best suited to the needs of staff of this EcoCampus University.
Deputy Registrar, Luqman Ridha Anwar of the Registrar Department representing the Registrar, Datuk Abdullah Hj. Mohd Said said that initially the department wanted to appoint professional consultants to help develop the programmes but after much deliberations then decided otherwise.
“These modules would not only cover areas of knowledge and skills but also the attitude of staff, which is the most important part of a training,” he said during the official opening ceremony of the workshop which was attended by about 50 modules formulators made up of UMS staff from various schemes.
“I am pleased to note that 69% of the course facilitators were made up of staff even though we should also engage good facilitators from outside who could give enormous input to improve ourselves,’ he added.
MyCPD is a Continuous Professional Development plan for staff of UMS that would equip them with vast knowledge and excellent skills besides possessing the right attitude in tackling their everyday work.
By Feria Lee