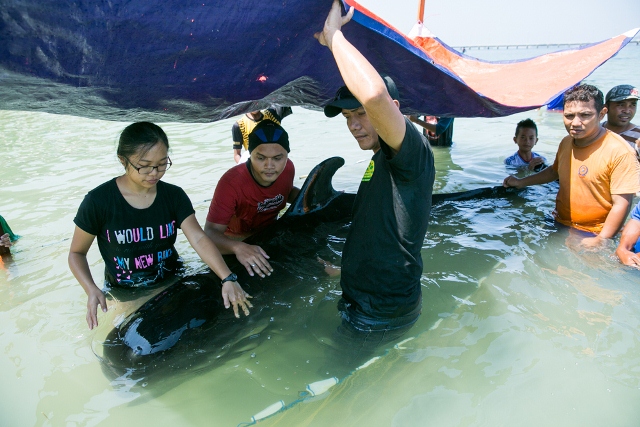 THURSDAY, 19th MARCH – A dolphin, believed to be the Risso Dolphin species, was found at Kampung Teluk Layang waters, Likas by two fishermen in the nearby waters around 6.00 am this morning.

Three metres in length, the dolphin was then ushered to Universiti Malaysia Sabah (UMS) Out-Door Development Centre (ODEC) by a group of rescuer from Borneo Marine Research Institute (BMRI) and Sabah Wildlife Department after they were contacted by the villagers.

According to UMS BMRI postgraduate student, Ian Lavi Jackery, the dolphin weighs 300 kilograms have minor injuries on the head and body.

Together with a group of security team, he informed that the dolphin had received few treatments from Wildlife Department and still under their examination and observation.

Another wildlife veterinary on the scene, Dr. Sandy Ling also informed that the dolphin was potentially infected.

“We will be giving whichever helps and treatments needed,” he said while adding that it is still early to know the reason why the dolphin was stranded. -ZMD (JA)