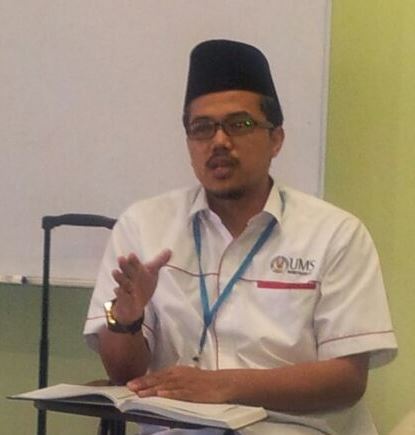 THURSDAY, 22 MAY – In conjunction with the of Israk and Mikraj events of Prophet Muhammad SAW on 27 Rejab, equivalent to Gregorian calendar 27 May, the Mosque and Islamic Affairs Unit (UHEIM) UMS held a talk on the definition of the wisdom of the Great Prophet Muhammad SAW Israk Mikraj at UMS Mosque.
The talk was delivered by Head of UHEIM, Dr. Muhammad Suhaimi Taat had brought those present to deepen the secrets and sacredness of the Prophet on the Israk Mikraj event.
“Israk Mikraj was a sacred journey and it was then that Prophet Muhammad received the mandate to perform the five daily prayers. These prayers become the very essence of Israk Mikraj,” he said.
He explained further that prayers are obligatory to all Muslims and have unique features compared to other religious obligatory duties.
He added that prayers that were done whole-heartedly would prevent any detestable actions which would diminish Muslim faith.
“Remember, all practices, whether good or bad will still get what they deserved for their actions,” he concluded. – SM (fl)
Media and Citra Division
Chancellery Department