Courtesy Call to the Head of State 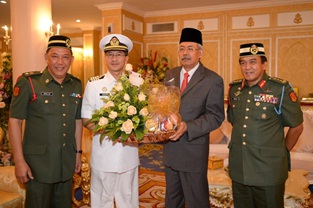 The courtesy call was to inform the Head of State of the forthcoming 32nd Public Universities Cadet Reserve Officers Commissioning Ceremony which will be held from the 6th to 7th July 2013 at the Parade Field and Chancellor Hall UMS.  His Majesty the King, Tuanku Abdul Halim Mu’adzam Shah ibni Almarhum Sultan Badlishah had given his consent to be the guest of honour at the function.

This annual affair is conducted on a rotation basis with 15 public universities and will be held for the first time in Sabah, in particular UMS.  A total of 1,344 cadet reserve officers will be commissioned during this event which comprise 658 male cadets and 686 female cadets.

According to Maj. Gen. Datuk Mazelan, all cadet officers who are commissioned will be absorbed to the Territorial Reserve Team as Junior Lieutenant.

“They can also apply to be fulltime army personnel under the Malaysian Armed Forces (ATM),” he said.