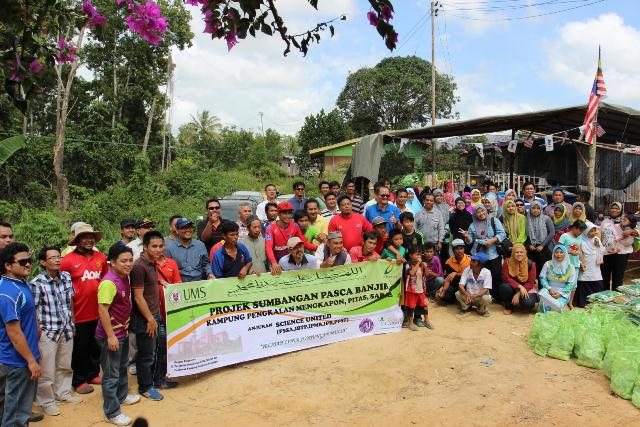 THURSDAY, 12 MARCH – For two years in a row, once again the combined forces of the Faculty of Science and Natural Resources (FSSA), Insitute for Tropical Biological and Conservation (ITBC), Borneo Marine Research Institute (IPMB), Biotechnology Research Institute (IPB) and Science and Technology Preparatory Centre (PPST) were awarded the Best Charity Project in conjunction with Maulidur Rasul UMS level for 2015.

The group called Al-Jawwad had conducted two community programmes with the local community of Kota Belud and Pitas, Sabah.

UMS staff and the residents joined forces and worked together for four days to provide those basic needs.

Three clean water storage tanks are now available at Masjid Kg. Sarang for their convenience and comfort for the purpose of ablution.

It was to help 77 families in the village who were affected by the recent floods.

The programme, which also had Beras Nasional (BERNAS) donating 850 kilogrammes of rice, also donated other basic needs and clothing collected from staff of the group in Al-Jawwad.

In addition, the village mosque loudspeaker system was upgraded and was contributed by MyOSP (M) Sdn. Bhd.

A total of 13 four-wheel drive vehicles belonging to staff of the group were used to transport all material aid and donations that was delivered at the ceremony which was attended by more than 200 villagers. – SS (fl)