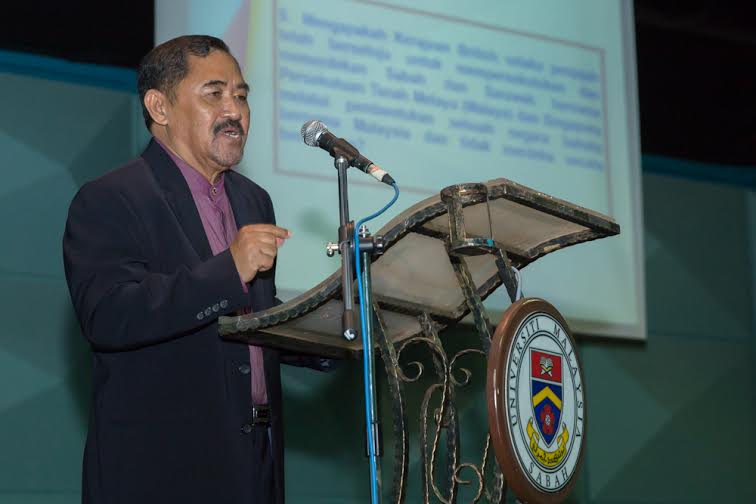 WEDNESDAY, 11 MARCH – “History cannot be changed, but can be thought of rationally for the security and development of the country.”

Those were the words of former Director of State Archives, Datuk Datu Tigabelas Datuk Zainal Abidin when delivering his presentation on Socio-Cultural Community of Sabah: in the Malaysian Cultural History Corpus Context.

He was touching on some issues related to the formation of Malaysia on 16 September 1963, in his presentation.

He said, based on facts recorded during his tenure at the State Archives for 37 years, the notion that some parties claimed the formation of Malaysia was composed of a combination of four countries was less than accurate.

It was because, during that period, Sabah and Sarawak had not been confirmed as a country and were still under the rule of the British Governor.

“The British Government formed Malaysia with Malaya and Singapore, each of which had a Prime Minister at the time.

“With regard to the date of 31 August 1963 purportedly claimed by many as the actual date Sabah gained its independence was actually the appointment of Sabah’s Chief Minister, the same for Sarawak on 22 July 1963 in a function appointing the same,” he added.

At the time, the Cabinet of Sabah had yet to be formed, which confirmed the fact that Sabah and Sarawak had yet to become a country at that time.

“But I agree that the formation of Malaysia in 1963 consists of four entities, namely Sabah, Sarawak, Singapore and the Federation of Malaya,” he explained.

Almost 300 UMS staff and students attended the presentation, which was held in conjunction with the Nation Building Seminar 2015: Sabah Developed in Malaysia Series 2/2015. – SS (fl)