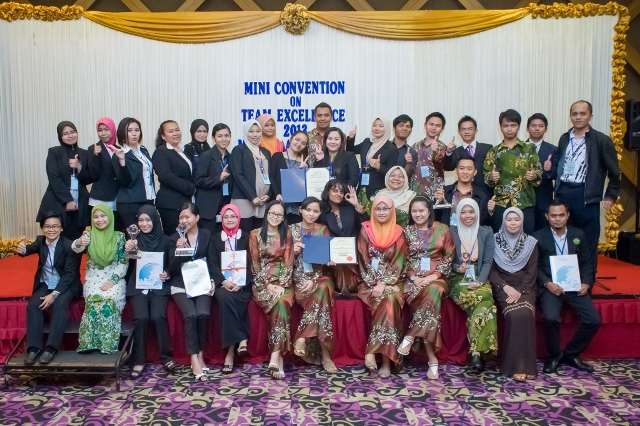 There were DEBUG from the Information Management Division (HRD), Registrar Department, M’TECHS and Dinamik from the School of Medicine (SPU) and RMEC from SPU’s Sikuati, Kudat branch.  The participation of these four teams at this convention which is now known as Team Excellence Sabah Region 2013 Mini Convention proved to be rewarding as all the four teams managed to grab the Gold Award.

Also taking home the Gold Award was the team from Sabah Electricity Sdn Bhd (SESB) namely KIK KREATIF, KIK QAUTEAM and KIK ZERO’N besides other teams from Petronas Chemical Methanol, Labuan namely KIK ROTALINE and KIK EXCHANGER.  The same award was also won by KIK POLIGON from the Land and Survey Department (JUPEM), KIK AVATAR from the Women and Children’s Hospital, Likas and KIK SENI Labuan Corporation.  All recipients of the Gold Award will be competing again in the Team Excellence Sabah and Sarawak Region Convention which will be held on 3-4 July 2013, at Sutera Harbour Resort, Kota Kinabalu.

The KIK Mini Convention which was held for two days saw 14 entries from government and private agencies. – FL