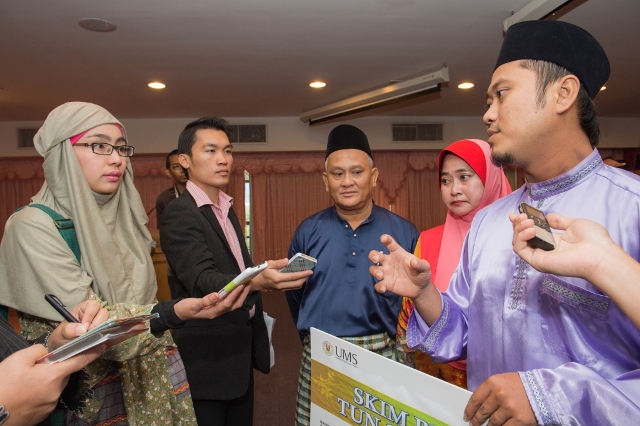 FRIDAY, 12 APRIL – Two recipients of the Tun Said Keruak Scholarship were thankful for being chosen to receive this award.

For Shaiful Huzairi Mohd. Kahil, a student under the History Programme at the School of Social Science described the grant as a blessing and will take advantage of the offer to fund his research on the Involvement of Sabah Bajau Leaders in Malaysian Politics (1963-2000).

The student who hailed from Semporna, Sabah said that he did not expect his application would be approved but insisted that the grant is a boost for him to produce a research of high impact in line with the call made by the Vice-Chancellor of UMS, Prof. Datuk Dr. Mohd. Harun Abdullah.

The second recipient, Amirulnizam Jamaludin expressed the same sentiment when met by the reporter from the Information and Media Section Corporate Relations Division.  For someone who hailed from Peninsular Malaysia he said, the scholarship means a lot especially when it comes from a prominent leader in Sabah.

A visit to the Kota Belud Tamu in 2008 proved to be the spark that ingnites his deicision to conduct a research on ‘Decoration In Cultural Objects and Its Connections With the Bajaus of Kota Belud’ as the chosen topic of his study.

“I saw the Bajau warriors clad in their unique traditional gears riding their horses and this attracted my attention.  I have never seen such culture in the Peninsular, and from then onwards I have implanted in me an interest to pursue this culture,” he said.  Amirulnizam also holds a Degree in Visual Arts Technology from the School of Arts Studies, UMS.