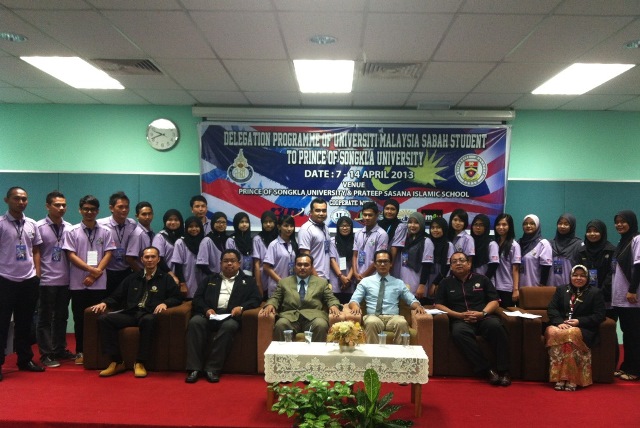 FRIDAY, 05 APRIL – Universiti Malaysia Sabah through the School of Psychology and Social Work (SPKS) will be sending 25 students to the Prince of Songkla University Thailand on the 7 April.

Deputy Dean (Academic and Student Affairs) Assoc. Prof. Dr. Mohd. Dahlan Hj. A. Malek said the programme among others was aimed at establishing close cooperation between the two universities.

He said the programme focusses on the services with the community at the educational campus and its surrounding areas.

“The programme which will be conducted by third year students will give an enormous impact to its participants through the sharing of ideas and exposure to foreign countries’ learning methods which is seen very timely especially in answering to the government’s call to excel in the empowering of human capital development agenda,’ he said when officiating at the ceremony.  Also present were the SPKS Head of Social Work Programme, Risalshah Latif; Programme Director, Bursa Nawawi and lecturers of SPKS.

According to Dr. Mohd. Dahlan, the delegation involved in this programme will be bringing with them the university and country’s image as a message of peace and showcasing the culture and eastern ethics which is consistently practiced by Malaysians.

“At the same time, the students will be able to witness the eco system around the villages which they will visit in Thailand so as to apply the same in the implementation of eco-campus in UMS,” he added.

The delegation will be in Thailand for a week and will be expected to return home on 14 April 2013.