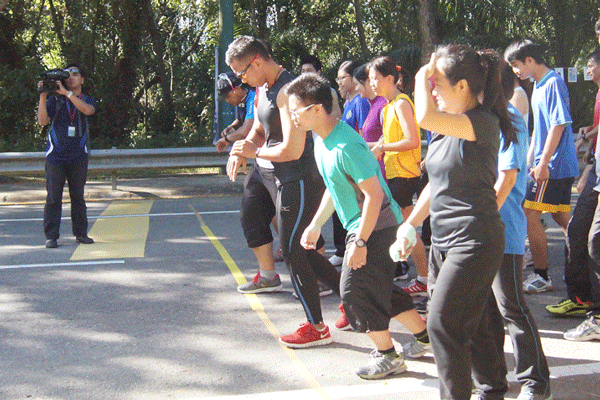 MONDAY, 28 APRIL – The Open Day for Residential College Cemerlang Dinamik (Kolej CD) was successfully held recently. One of the highlights was the Wellness Community Run which was participated by almost 100 participants.

Starting as early as 8.15 am, the participants consisting of communities around Kota Kinabalu City was required to run a distance of five kilometres around the campus area starting and ending at Kolej CD.

In the Men’s Category, the first place winner was won by an athlete who was no stranger to Sabah sporting fraternity, Guainus Salagan who edged his closest competitor, Karim Soriew who finished at second place. Third place went to a participant from UMS, Louis Muslin.

In the Women’s Category, Kona Liau was crowned champion followed by the competition favourite, Esther Perng who had to settle at second place while third place was won by Nurulnida Hamdan. Winners for both categories received medals and certificate of participation.

The opening ceremony and prize-giving presentation was performed by the Haj Fund Board Director, Datin Nurlaila Said and a representative from the sponsor, Muhammad Zuhri Alimin of Atiqah Enterprise. – SS (fl)