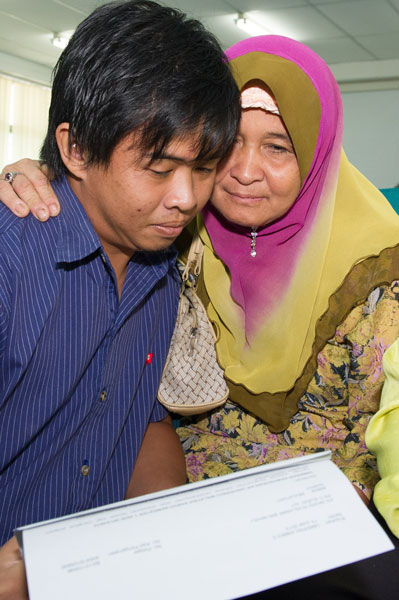 FRIDAY, 23 AUGUST – 12 students from poor families received their letter of offer to further their tertiary education at Universiti Malaysia Sabah (UMS) at the Papar District Office today. The number comprised seven students from Papar, three from Beaufort and two from Sipitang.

The handing over of the offer letter was done by the Assistant Officer of the district’s Development Division, Adnan Takin.

Speaking at the event, he said UMS and the Education Ministry’s effort to help the underpriviledged was timely in ensuring that the poor would have an opportunity to further their studies to a higher level.

“I urged those students who are receiving their letter of offer to make full use of this opportunity which would help to transform their standard of living in future,” he said. Also present was UMS Assistant Bursar, William Aloysius Jr, Assistant Registrar of the Academic Services Division (BPA), Riniwati Raksan and BPA’s Assistant Administrator Ahmad Saprawan Roslee.

A briefing was then held on the forthcoming Orientation Week for new intake on 01 September.

In a related development, two students from Tamparuli also received their letter of offer which was presented by Tuaran Member of Parliament, Datuk Madius Tangau.

In Kota Belud, 14 students from poor families also received their letter of offer to this EcoCampus University.

The handing over of offer letters will continue tomorrow until Sunday in the Interior, West Coast North and East Coast. – FL