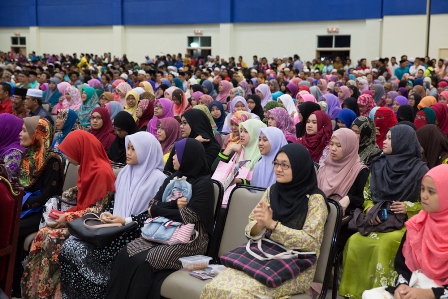 MONDAY, 2 MARCH – The Main Lecture Hall 2 was flooded with the attendance of nearly 4,000 people to listen to talks in conjunction with Maulidur Rasul 1436H/2015M, Universiti Malasyia Sabah (UMS) level, recently.

UMS media survey found that besides staff and students of UMS, the talk presented by a guest speaker from Universiti Hasanuddin Makasar, Indonesia, Ustaz Das’ad Latif was also attended by public from various districts in Sabah.

One of those who attended, Muqqarabin Ramly Sham said he and his family came to UMS merely to listen to the talk by Ustaz Das’ad.

“My family and I came here specially to witness for ourselves this renown speaker.  Thanks to UMS for inviting the public to attend as well,” said Muqqarabin, who hailed from Sandakan.

Meanwhile, homemaker, Jamilah Said when interviewed also expressed her gratitude and hoped that many more such programmes would be organised by UMS in future.

“UMS  is thoughful, not only we had the opportunity to listen to the talk but also visit interesting  places around UMS.  I hope such talks will be organised again in future,” said Jamilah who was present with her five children.

In addition to the talk, Ustaz Das’ad enlightened all the meaning and purpose of Maulidur Rasul.

He said such celebration could increase the love for Rasulullah SAW besides appreciating the prophet’s sunnah in keeping faith to Allah and to preserve the belief in fighting for Islam and its syariat. – SM (fl)