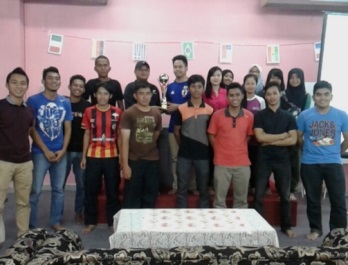 The stiff competition held at Universiti Malaysia Sabah (UMS) Sports Complex saw the teams from the Men’s Category divided into four groups using the names of the countries competing in the FIFA World Cup 2014.

The competition which adopted the League system saw a total of eight teams from the four competing groups namely Japan, England, Nigeria, the Netherlands, France, Portugal, South Korea and Uruguay faced a fierce battle in the quarterfinals.

Team Nigeria advanced to the semifinals and defeated team Japan to move into the final to meet the French team which earlier had beaten rival team England.

The stiff fight during the final saw team Nigeria and France tied at 2-2. The champion was determined by a penalty shootout. Luck seemed to side team Nigeria when they led 3-2 at the penalty.

In the Women’s Category, team Mexican emerged as the champion when they defeated United States who had to be contented with the second spot. Third place was team Argentina.