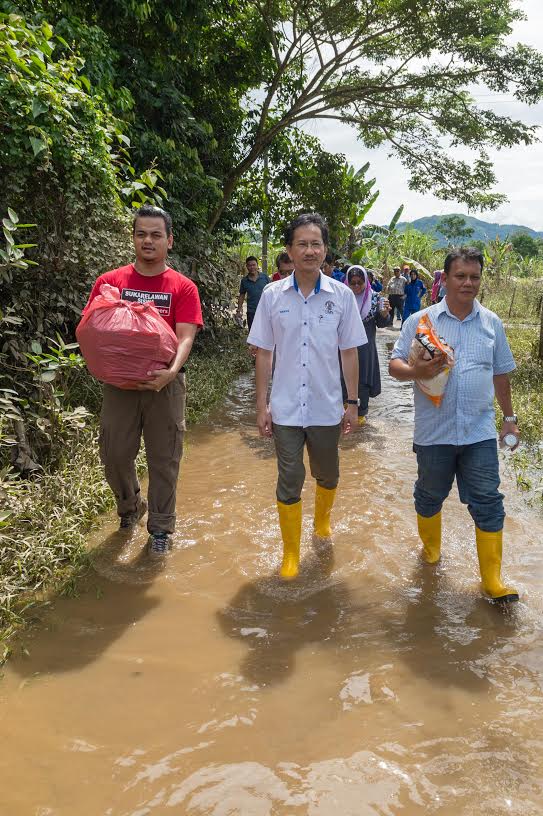 According to Datuk Harun, the volunteers involved 20 staff and 80 students of UMS who started their mission by collecting basic necessities such as rice, milk, mineral water and so on with total goods amounting to RM15,000.

“UMS is always ready to assist communities affected by calamities such as floods that occurred in some areas because we are also responsible in helping to reduce the difficulties faced by the victims,” Datuk Harun explained when met at the Tun Said Keruak Community Hall, Kota Belud yesterday.

The symbolic handover by Datuk Harun to the Assistant District Officer of Kota Belud, Peter Jiton was witnessed by the Deputy Minister of Public Works, YB Datuk Rosnah Abdul Rashid Shirlin at the hall.

Datuk Harun who led the UMS post-flood relief mission in the areas said besides distributing donations to flood victims, one can also witness for themselves the situation and the damage caused by the floods.

“We not only donate materials, but we will do follow-up sessions especially on the psychological and emotional state of the flood victims that are affected due to the disaster that had hit them.”

“I commend the efforts and energy displayed by UMS students who are willing to spend some time to voluntarily assist in this mission,” added Datuk Harun.

According to one villager, Selamat Soor, 45, he recounted how the water level raised rapidly. But the villagers were able to transfer their vehicles to higher ground as they were well prepared .

“We are grateful for the concern shown by UMS in helping us during our difficulties after the flood,” he said, overwhelmed by the involvement of UMS in helping to reduce their burden.

At Kg. Tanjung Pasir Labuan, a total of 60 victims were still taking shelter in a village mosque.

A total of 60 food parcels were delivered by Datuk Harun to the resident representatives, the Chairman of JKK Kg. Tanjung Pasir Labuan, Jelin Sidum.

According to Jelin, although the flood had receded, some houses were still inundated by the flood waters.

“On behalf of the residents affected by the flood, we are grateful with the assistance given,” said Jelin. – CD (fl)