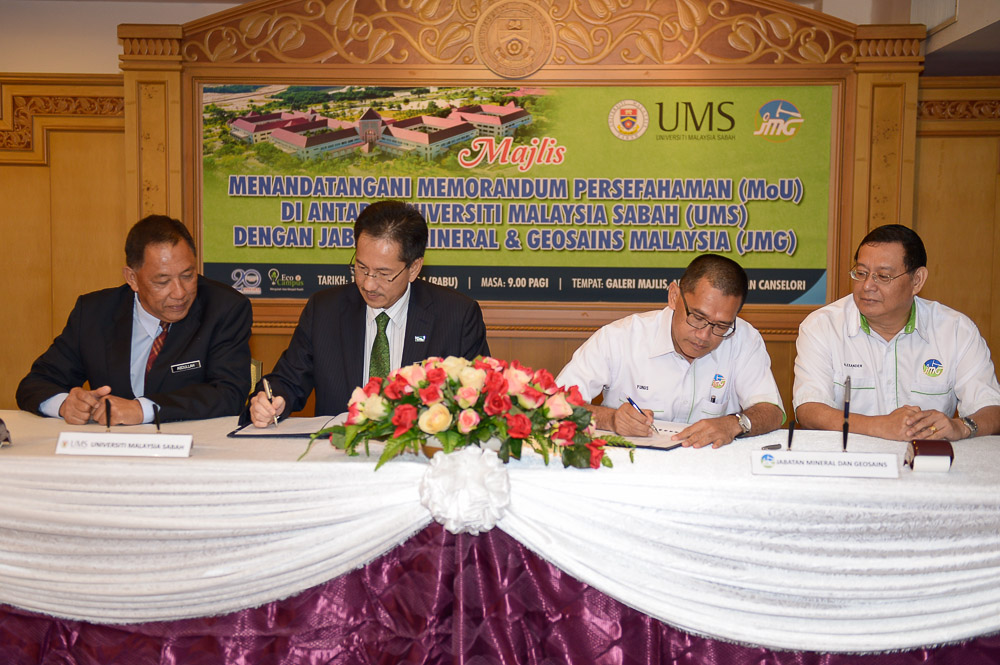 WEDNESDAY, 12 FEBRUARY – The long-standing relationship between Universiti Malaysia Sabah (UMS) and the Department of Minerals and Geoscience Department Malaysia (JMG) was further strengthened through the signing of a Memorandum of Understanding (MoU) today.

The signing ceremony which was held at the Gallery, Chancellery Building saw UMS represented by the Vice-Chancellor, Prof. Datuk Dr Mohd Harun Abdullah and JMG represented by the Director-General, Dato’ Yunus Abdul Razak exchanged documents as a symbol of the close ties and various future collaborations between the two parties.

Earlier in his speech, Datuk Harun said the MoU proved that UMS had moved a step forward in enhancing its research and human capital development.

He said the collaboration between UMS and JMG had been on-going informally.

“We have a lot of students who undergo practical training besides the involvement of UMS researchers itself in the projects undertaken by JMG,” he added.

Meanwhile, Dato’ Yunus in his speech said that he welcomed such move which he deemed as having an impact in generating the country’s resources through research.

“We have the data in the fields of geoscience and mineral that can be shared for these purposes,” he said.

He also said that many of his staff studied and graduated through UMS and later served exceptionally in his department.

“Thus, the MoU signed today serves not only as a beginning but also motivation towards forthcoming collaborations,” he said.