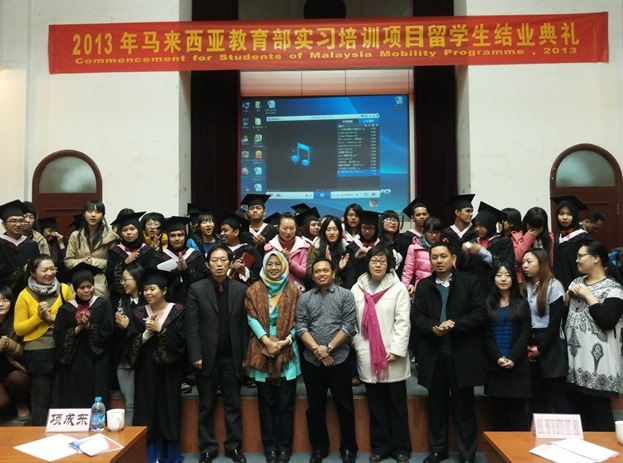 The three-month language course was part of the Malaysia-People’s Republic of China Student Mobility Programme for six months after the last of their university semester.

The course was organised by the Centre for Industry Excellence (Retail and Wholesale), Education Ministry in collaboration with the National Advance Training Centre (NATC) and Tianjin Foreign Studies University (TFSU), China.

According to the Head of the Centre for Industry Excellence, Assoc. Prof. Dr. Hartini Ahmad, the Malaysia-People’s Republic of China Student Mobility Programme was aimed at increasing the employability of graduates in the field of retailing and wholesale.

“With their Mandarin language speaking ability, they would have an edge to be employed in the industry. This was evidenced by a number of local industries that had shown interests in taking them after the programme ended,” he said.

Meanwhile, Dean of the College of International Exchange (TFSU), Professor Xiang Cheng-Dong said Malaysian students had shown outstanding performance to be able to communicate in Mandarin very well in a short period. He sincerely hoped that this programme would be continued in future.

NATC Business Development Director, Noor Azli Yusof reasoned the pairing with local students which was a first, as a factor for the fast learning of this batch of students compared to the first batch last year.

Meanwhile, one of the students when interviewed said the programme was not only on the learning of language but also an exposure to the unique Chinese community culture.

Also present at the ceremony was the Deputy Director of the Centre for Industrial Relations UMS, Dr. M. Kamel Wan Ibrahim who praised the students for their commitment shown and who were willing to miss their convocation day just to be able to join this programme.

All the students will be placed in a number of industries such as retail network such as Parkson China and Aeon Mall, China starting 2 January 2014. – SS