Heavy Penalty To Those Found Guilty 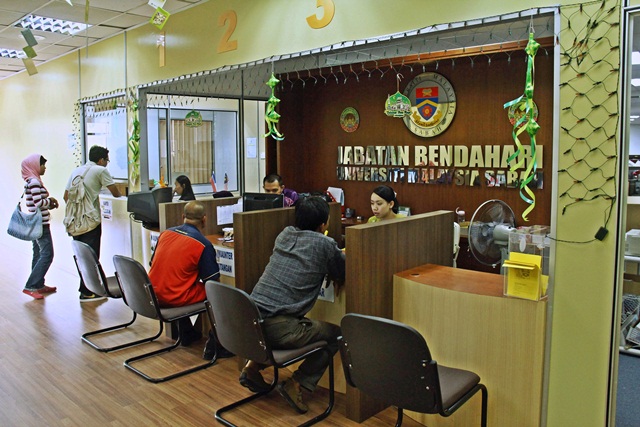 FRIDAY, 11 OCTOBER – There would be no compromise for staff who misappropriate the university’s allocation or fund. Staff found doing it would face heavy penalties imposed by the Management of Universiti Malaysia Sabah (UMS).

This was stated by UMS Bursar, Tuan Hj. Rizal Othman when asked to comment on the statement by the second Finance Minister, Datuk Seri Ahmad Husni Hanadzlah regarding the issue of misapropriating allocation among government staff.

According to Hj. Rizal, the allocation given should be used wisely to fund the university’s efforts in propagating knowledge which will propel UMS to continue moving forward in producing human capital who are competitive.

“If the allocation were misused, it would be a big loss to the university and would impede all efforts that had been planned,”, he added.

The Bursar who is also one of the Principal Officers of UMS said that the Bursary will monitor every Department, Centre, School, Institute and Unit (JSPIU) periodically to ensure this unhealthy practise did not exist or happen in UMS.

“For this purpose, the Bursary together with the Internal Audit Division will conduct audits at regular intervals to identify and prevent any form of misappropriation or misuse from happening in the university,” he stressed.

Recently, Datuk Seri Ahmad Husni in a national newspaper said firm action would be taken on the officer and staff of any ministry and agency who misused government funds and who did not comply with the guidelines outlined. – FL