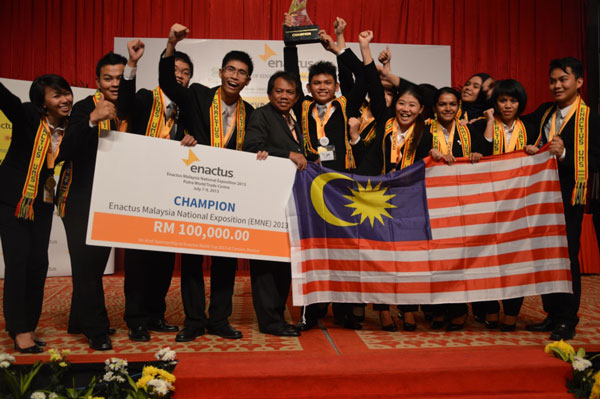 TUESDAY, 16 JULY – Universiti Malaysia Sabah (UMS) once again displayed an excellent achievement when they defended their title as the champion at the Enactus (Entrepreneurial. Action. Us) Malaysia National Exposition (EMNE 2013) which was held at the Putra World Trade Centre (PWTC) in Kuala Lumpur recently.

The UMS Enactus team edged the Enactus teams of Universiti Utara Malaysia (UUM), Universiti Teknologi Mara (UiTM) and Universiti Tenaga Nasional (UNITEN) at the Finals making UMS champs for two years running. The victory once again enabled UMS to represent Malaysia at the Enactus World Cup Competition which will be held at Cancun, Mexico on 29 September until 1 October this year.

According to a team member Celine Alexandra, the community project presented by the UMS Enactus team attracted the attention of the judges. Celine, who is also the Director of the Payao project said it had attracted many followers as it involved the efforts of the Mabul Island community in increasing their catch thus generating a higher income.

Another project which was presented was the ‘Unfold’ Project which helps the Underpriviledged (OKU) and the poor. The Director of the project, Aarston Friend Dickson expressed his appreciation because the project was well received by the judges and members of Enactus Malaysia.

“We would like to thank Enactus Malaysia for organising this EMNE Competition; we were able to share our experience to help with the underpriviledged here in Sabah,” he added.

“We would also like to thank the Director of Labuan International Campus UMS, Assoc. Prof. Dr. Ismail Ali, Alumni and all those who had in one way or another rendered their assistance, thus helping the team win the competition this year,” he said.

The competition, which was formerly known as Students in Free Enterprise (SIFE) was participated by 28 teams which represented their own public and private higher learning institutions. This yearly competition organised by Yayasan Enactus Malaysia aims to highlight the creativity and innovation on community projects by university students in this country, among others. A total of 12 UMS students who took part in this competition ensured that the champion trophy belongs to the UMS Enactus team. – FL