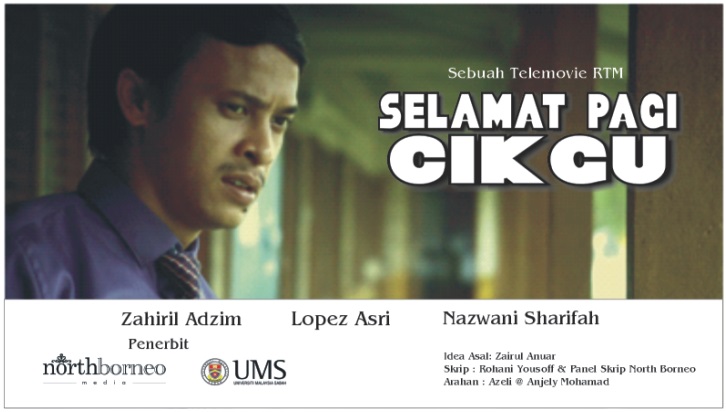 Besides animation films done by both parties, the telemovie produced for Radio and Television Malaysia (RTM) was the second production after producing a documentary on research entitled ‘Sunduk Omadal’ in 2012.

Manager of North Borneo who was managing the production, Alinah Osman said the production of the telemovie and documentary simultaneously was beneficial to both sides, especially in providing opportunities to undergrads to engage in actual film production professionally managed through a combination of expertise.

According to her, most of the production crew and telemovie actors were made up of staff and students of UMS from the Creative Arts and Visual Arts programme, Faculty of Humanities, Arts and Heritage (FKSW).

“Through the production of this telemovie, we only made use a handful of skilled and experienced actors with other production crew and actors from among the students and staff of UMS.

For example, he said the original idea of the story was produced by FKSW lecturer, Dr. Zairul Anuar Md. Dawam and the script was written by a former staff of FKSW, Assoc. Prof. Dr. Rohani Yousoff.

Alinah also said that the initial management task or pre-production was done by the lecturers and UMS students themselves including their alumni.

“Other then the famous actor Zahiril Adzim, more than 90% of the actors involved consists of UMS students and former students studying creative arts such as theatre, writing and dance,” she explained.

Meanwhile, Dr. Zairul Anuar when contacted said the involvement of students in a production co-managed and also professionally between UMS and North Borneo was to expose FKSW students to the aspect of actual production.

He said the involvement in the production of the telemovie would provide guidance and benefit for students of FKSW to produce quality video for film projects or for the course that they undergo thereby instilling interest to be involved in the creative industry after completing in their studies.

‘Good Morning Teacher’ directed by Azeli Mohamad was a story of a graduate teacher who was forced to become a teacher because he could not get other jobs and was sent to the rural area in Sabah to work. However, after a few months into his job, he was attracted to life in the village and its people making him determined to be an excellent teacher. - (fl)