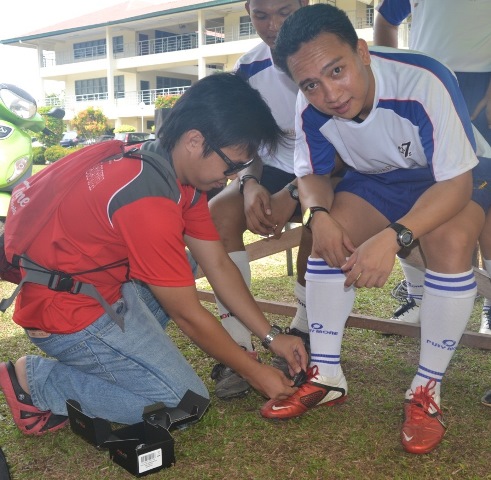 MONDAY, 20 MAY – The Sports Science Programme, School of Education and Social Development (SPPS) Universiti Malaysia Sabah (UMS) continues to spearhead research on rugby referees in Malaysia with various researches done headed by the head of the programme, Dr. Mohamad Nizam Nazarudin. Recently, Dr. Mohamad who is also the former international rugby referee and three UMS Sport Science undergraduate students conducted research on 7-a side rugby coaches in the state.

“This research was done due to some grouses by players and team managers on the performance of rugby referees. Hence, my research team and I hope that this research would be a fruitful contribution towards the rugby sports especially to the referee of this sport in Malaysia,” he further added.

Dr. Nizam who is the international rugby referee evaluator said the research was done on the four main referees in the state who had vast knowledge in the field of rugby in Malaysia including refereeing at the Malaysian School Sports Council (MSSM) and the Asean Rugby Football Union (ARFU). According to him, the apparatus used in this research is known as the Polar Personal Trainer RC3, GPS, a device that uses the technology of pulse detector, length and running pattern affixed to the chest and leg.

In the meantime, one of the referees, Vencant Yakun said the research was important to ascertain the referee’s performance of the said event when refereeing in a championship. He said each referee should own this device so that they can gauge for themselves their own performance as the device is seen as an important tool to assess their physical fitness and the health level of rugby referees.

Another referee, Andreas Hendricus thought that the research using the said device was interesting because the data can be seen as soon as the championship was over. Hence, he hoped that the efforts should be continued so that this sport can be improved further in future.

Meanwhile, all three Science Sports Programme students who assisted in this research held that this research was one of the branches for knowledge which was new to them. Besides acquiring experience as a researcher, Ericson Gustin, Azizul Lawrence and Almah Darus also hoped that they would be given the trust and guidance from Dr. Nizam to conduct future research on rugby.

Besides the research, Dr.Nizam also conducts research on judges’ performance predictor factor in his PhD thesis. His invention and innovation in producing the device to help with rugby referee training to obtain recognition and also won Silver medal in the Invention Competition (PEREKA) 2012 and Silver medal at the national level through the International Invention, Innovation and Technology Exhibition (ITEX 2013). The success helped raise UMS’ name as the first referee research centre in Malaysia. – FL