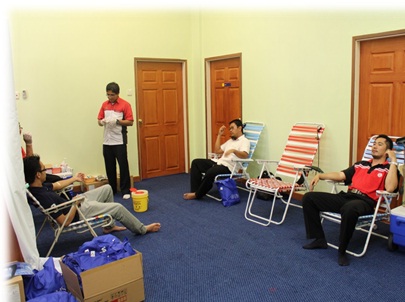 THURSDAY, 16 MAY – 143 Universiti Malaysia Sabah (UMS) staff and students donated blood at the Blood Donation Campaign which was held at UMS Mosque recently. The campaign was conducted for three days and organised by the Islamic Affairs and Mosque Unit UMS, UMS Health Care Centre and Bursar Staff Club with the cooperation of Baitulmal Corporation Sabah.

According to a statement issued by the secretariat of the organiser, the blood donated during the programme which was attended by the Vice-Chancellor, Prof. Datuk Dr. Mohd. Harun Abdullah will be channelled to Queen Elizabeth Hospital (QEH) to provide supplies to their blood bank.

Besides donating blood, the campaign had also successfully collected eight boxes of used clothings which was handed to the Baitulmal Corporation Sabah and was distributed to those in need. Religious talks were also held during the campaign entitled ‘Islamic Medicine’ which was delivered by Ustaz Yusri Sumin. Ustaz Issraq Hj. Ramli had also presented a talk on the ‘Importance of Charity’.

In the statement, the organising secretariat voiced their hope that campaigns such as this would continue to be organised every year in efforts to help the blood bank of QEH. At the same time, the statement also stated that the campaign had given a huge impact on the students and the public within UMS staff to always appreciate their health and to inculcate the caring nature of doing good.

Throughout the campaign, four counters were opened which were Islamic Treatment, Free Check-ups, Baitulmal Corporation Sabah and Book Sales. – FL