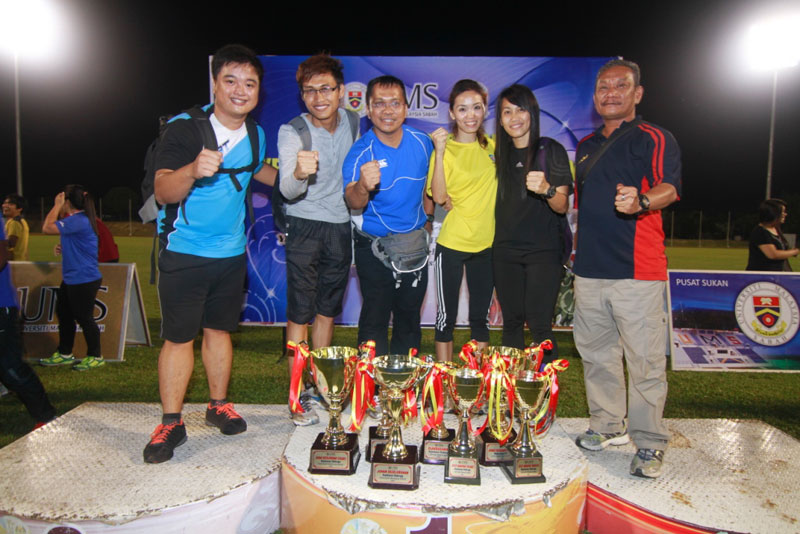 Tuesday, 2 April – The School of Education and Social Development (SPPS) took the champion trophy at the recent 15th UMS Education Schools Athletics Championship.  They collected 24 gold, nine silver and five bronze thus becoming the overall champion for three consecutive years.  This achievement showed an increase in the medals tally compared to last year’s which was 21 gold, 14 silver and seven bronze.

The School of Psychology and Social Work (SPKS) and the School of Business and Economics (SPE) took the second and third spots respectively.  SPKS grabbed four gold, four silver and three bronze whilst SPE took one gold and two bronze.

All category of awards on offer were grabbed by athletes from SPPS.  For the Female and Male Hopeful Athlete categories, the winners were Merry Gabalin and Makenzie Jetol.  Merry won the triple jump, 4x400m and 100m, where she created a new record.  Makenzie grabbed gold in two events; shot putt and javelin.

The Best Female Athlete was won by Emmy Ahkim, collecting three gold in the 400m, 800m and 4x100m events.  She also rewrote her own record in the 400m event made in 2012.  The award for Best Male Athlete category was won by Eldy Sham Erlon who was also the holder of the 100m which has not been broken for the last 10 years.  He also won two gold in the 110m hurdles and 4x100m relay events.

SPPS coach who is also the Sports Science Programme, Dr. Mohamad Nizam Nazarudin expressed his satisfaction over the athletes’ performance and hope that they would be chosen to represent the state.

“I intend to send athletes who shines to participate in the coming open national championship besides preparing all athletes for the championship next year,” he said.

SPPS team manager, Hasnol Noordin said, the team’s success is because of the athletes’ commitment and discipline that enables them to improve further in their own field.

The championship attracted 244 participants from the schools contingents in UMS.  Aside from being an annual event, this championship included 29 events that served as a platform to uncover new talents to represent UMS at major championships such as MASUM, ASEAN University Sports and Higher Education Sports.