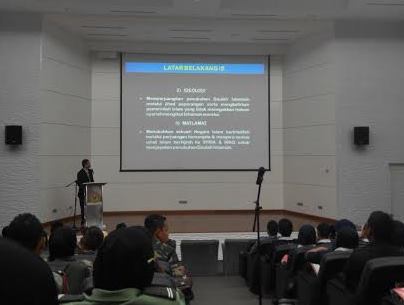 THURSDAY, 21 MAY – About 200 staff and students of Universiti Malaysia Sabah (UMS) attended a talk on SSKM and IS Militants Threats held at the YTL Auditorium this morning.

The lecture organised by the Student Affairs Department (HELP) was presented by a police officer of the Malaysian Royal Police Kota Kinabalu, Inspector Mohd. Shahrizan Yahaya.

In his talk, he described the background and objectives of the IS militants which had diverted from the true teachings of Islam.

He also stressed that the young generation especially university students should not fall into the trap of the militant ideology that was reported to be have been trying to enter this country.

Shahrizan also disclosed that a total of 61 Malaysians were found to be fighting as IS militants where some were killed.

Touching on SSKM, the police officer who hails from Perak explained that the organisation, which has its base on the social networking sites were akin to separatists who instigated the people of Sabah and Sarawak to secede Malaysia.

Hence, he said, it was an offence to be involved in SSKM as one could be convicted under the Sedition Act 1948.