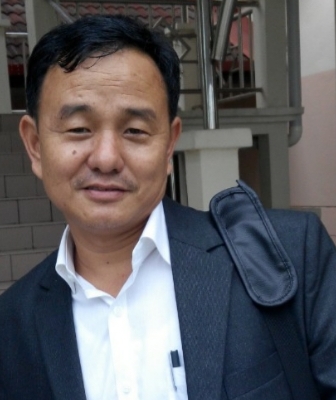 THURSDAY, 13 AUGUST – A participant of the Third Country Training Programme (TCTP) 2015 considered himself lucky to be part of the programme and to have gained knowledge in biodiversity conservation in Sabah.

Deputy Director of North Indian Arunachal Pradesh Itanagar Environment, Dui Dohi Robin (pic) said, his first perception about Sabah was that it was a very beautiful state with its sea and nature, something that is not found in his hometown.

“A lot has been shared throughout the TCTP until its 8th day today.

“For sure, the results obtained will be applied in the conservation of biodiversity and ecosystems in Arunachal later,” he added.

He said this when contacted by UMS reporters. – (fl)