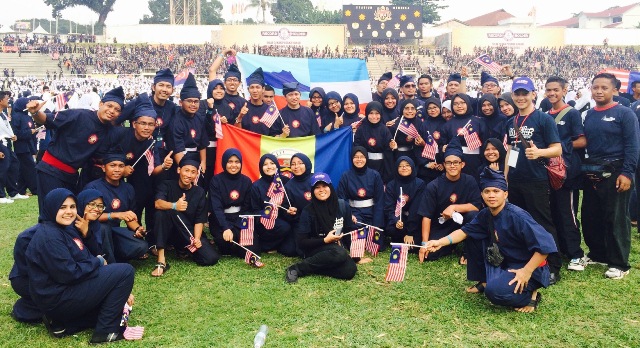 FRIDAY, 04 SEPTEMBER – A total of 13 alumni, 16 students and a staff of Universiti Malaysia Sabah (UMS) became among the 12,393 silat exponents who made it to the Guinness World Records in ‘Largest Silat Lesson’ Silat Cekak Pusaka Hanafi at Stadium Merdeka, recently.

Leading the UMS contingent, Radika Kalbie said, UMS exponents were in high spirits in carving a name in history at the internationally acclaimed event.

“This event not only shows the participation of the number of silat exponents, but also to uphold the art of silat,” he said, when contacted by the media.

He added, the achievement also indicated that silat was still relevant in this modern era, and the exponents were from among adolescents and youths.

He explained further that the making of name in the Guinness World Records was very challenging due to various strict rules and regulations that must be adhered to.

“However, all UMS participants and exponents met the conditions and the feat was confirmed as a new record,” he added.

Besides aiming to create a world record, the feat also coincided with the National Day 2015 celebration that also saw the silat cekak  celebrating its 50th anniversary in this country.

The achievement was headed by the sole heir to the Silat Cekak Pusaka Hanafi, Dr. Md. Radzi Hanafi and was witnessed by the Minister of Youth and Sports, Khairy Jamaluddin, who represented the Deputy Prime Minister, Datuk Seri Dr. Ahmad Zahid Hamidi. – SS (fl)