American Rock Cello Band in UMS for Meet and Greet 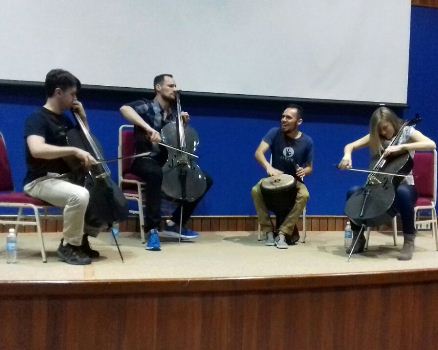 It is a program that allows audience to interact with the band, autographs and selfies. Audience also has the opportunity to watch a performance from the band.

Meet and Greet program is hosted by American Corner, UMS Library in collaboration with US Embassy, Public Affairs Section.

Break of Reality (New York) formed in 2003 at the prestigious Eastman School of Music in Rochester, NY.  During school breaks, the band would travel to New York City, where it performed its original music alongside covers of popular rock songs in subway stations and parks.

Break of Reality also has highly successful social media channels with 100,000 Facebook fans and 5 million views on YouTube of their cover of ‘Game of Thrones.’

They also toured with the American Music Abroad 2014-2015 Season. Performance highlights from last few seasons include a month long music education bus tour around the U.S., a sold-out tour of Alaska, direct support for the well-known rock band Cake at Worldfest in California, and featured showcases at the SXSW festival in Austin, Texas.

Break of Reality has also written and performed original music featured in national television programs, including Dateline NBC and America’s Investigative Reports on PBS (which went on to win an Emmy).

Rolling Stone, Billboard, and Forbes Magazine have featured Break of Reality in recent articles regarding internet radio, a medium that produces over 20 million streams a year for the band.