“Say it in English” Campaign at UMS 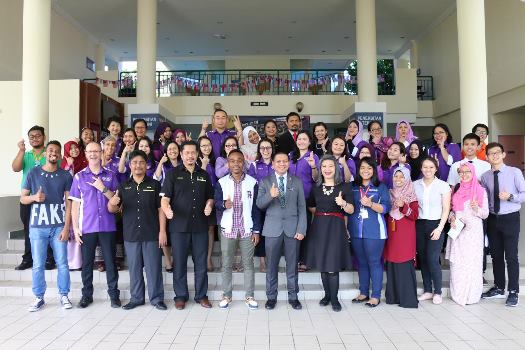 MONDAY, 22 MAY - A campaign, “Say it in English”, to promote the use of English at University Malaysia Sabah was launched at Pusat Penataran Ilmu dan Bahasa (PPIB) recently.

The campaign, an initiative of the Student Representative Council, aims to make Tuesdays English speaking days all over the campus, for both students and academic staff. As part of the campaign, an English Club with activities, games, singing and movies in English has been running at PPIB throughout the current semester.

A “Wonder Wall” has also been installed at PPIB, where students can post creative messages in English, and a space has been made for the English “word of the week”.

The dean of PPIB, Associate Professor Dr. Jualang Azlan Gansau, officiating at the opening ceremony, noted the need to support the Ministry of Higher Education in its efforts to upgrade English ability in Malaysia.

Remarking on the campaign, he said “It is a great initiative, and it is my wish that UMS students use this platform to improve their English.”

During his speech, the dean, whose mother tongue is Dusun, noted his own struggles to master English as a student, and urged students to strive to communicate in English despite the fact that they might not have perfect grammatical accuracy.

Support for the campaign was evident from both students and academic staff.

Deputy Dean, Mohd. Azri Ibraham commented that “we have to use our English in order to improve it.”

An English lecturer, Ms. Loh Yoke Len, echoed these thoughts, saying “students need this campaign to encourage them to use English as a medium of communication.”

John Mark Storey, the head of English, marked the occasion as “a wonderful opportunity to promote the speaking of English around the UMS campus, both inside and outside the classroom.”

Visitors from other faculties also offered their praises for the initiative.

Associate Professor Rachel Mansia, an engineering lecturer, said “I applaud the effort and I think it is the first time since UMS started that we have had such a programme.”

The English Club, popular among international students, has been successful in encouraging English use in a fun way.

A regular participant Abubakar Juma Bakari, of Tanzania, said the “Say it in English” campaign “is a good thing for our local friends” and hopes that “they will be awakened to speak English.”