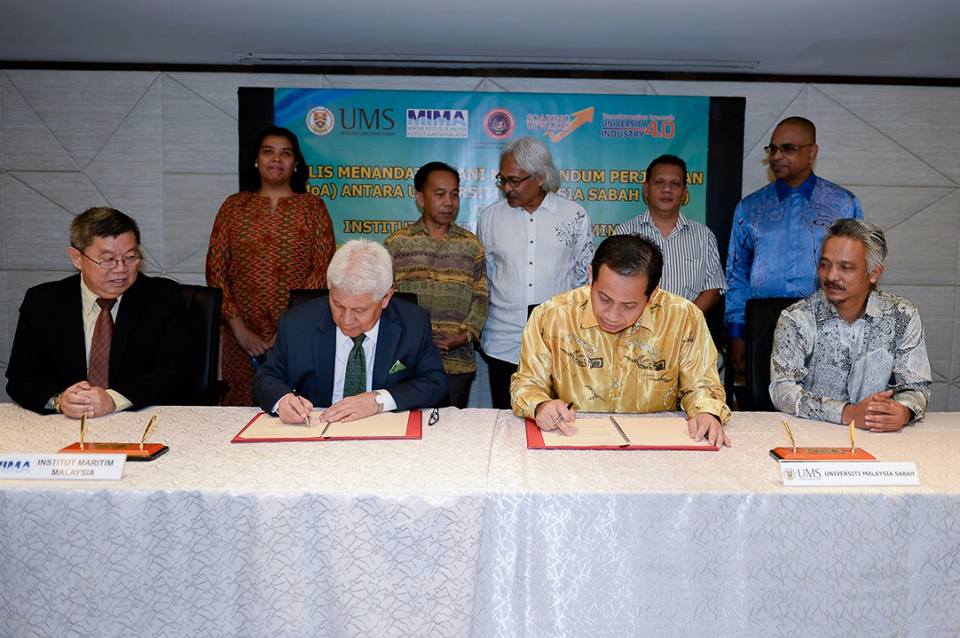 FRIDAY, 3 NOVEMBER - Universiti Malaysia Sabah (UMS) and the Maritime Institute of Malaysia (MIMA) signed a Memorandum of Agreement (MoA) on the 31st of October 2017 for cooperation to address issues on security in Sabah, specifically in the EssZone are.

This MoA formalises the joint collaborations by MIMA, UMS and NSC Sabah on the KESBAN (Keselamatan dan Pembangunan – Security and Development) at Sea project which had started since 2015.

This collaboration is aimed at proposing a holistic security approach through the development of a Balanced Scorecard for the ESSZone Committee as a management framework. The ESSZone is a necessary initiative in response to recent security issues in Sabah. It is seen as an attempt to contextualise the issues occurring in the region that is not solely restricted to security, but also to ensure livelihoods of citizens are being protected.

The effort is also to identify workable solution on an intricate matter with a myriad of issues. However, concerns still remain on its implementation and monitoring and it was highly suggested that a more collaborative approach, one that extends beyond government machinery and encompasses community leaders and civil society is needed.

As a policy research institute set up by the Malaysian Government to look into matters relating to Malaysia's interest at sea, and to serve as a national focal point for research in the maritime sector. The Institute takes a comprehensive approach in dealing with maritime issues.

Its role is to deal with national, regional and global maritime matters affecting Malaysia. a more collaborative approach, one that extends beyond government machinery and encompasses community leaders and civil society is needed. Thus, this project will not only address the challenges to traditional security, but also address management of scarce resources and duplication of efforts.

Prior to the signing, four workshops had been organised in 2016 based on the four pillars for a holistic approach, namely, economy, socio-politics, marine environment and security-defence led by experts from UMS and MIMA. Logistic supports throughout the workshops were provided by Sabah NSC. Workshop reports from these workshops are available on the MIMA website.

With the signing of the MoA, Phase II of the KESBAN at Sea project will involve the setting up of the Technical Committee to develop the Balanced Scorecard and the Steering Committee at state level to drive the effort.