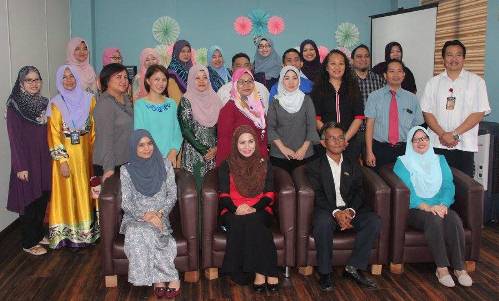 On hand to receive the members was the Chairperson of KESUMBA UMSKAL, Hayati Salleh Baihaki who is also the wife of the Director of UMSKAL, Assoc. Prof. Dr. Murnizam Hj Halik.

In his speech, the Director of UMSKAL congratulated KESUMBA for its role in empowering women thus helping the surrounding community to move hand in hand in achieving the desired goals.

“Rather than we talk to others about something we want to achieve, it is better that we achieve something that others talk about,” said the Director.

Earlier, the Chairperson of KESUMBA UMSKAL, Hayati Salleh Baihaki thanked its members who had assisted the surrounding communities in their quest for a better society such as giving a hand to the Persatuan Autisme Labuan and Tadika KEMAS.

Persatuan Autisme Labuan is the first of its kind to be set up within a university campus ground, and similarly for Tadika KEMAS as well.

The three-day visit also included other activities as the members foster closer relationship with their respective new Exco line-up.

A similar courtesy visit is planned for UMS Sandakan Branch in the near future. - FL