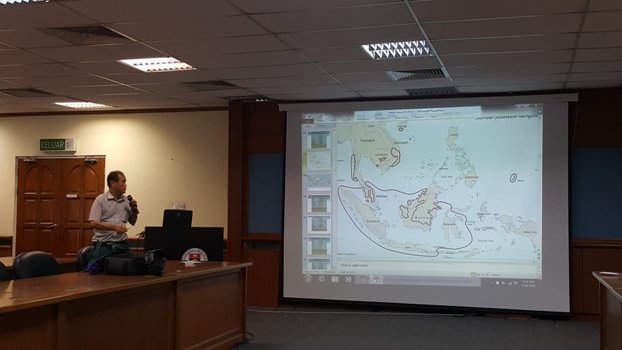 The unit recently held its third Brown Bag Seminar for Languages & Linguistics at Bilik Mesyuarat Utama, PPIB with the title ‘Numeral Systems of World’s languages focusing on the Austronesian languages in the Pacific’ delivered by Dr. Eugene SL Chan from Hong Kong.

Dr. Chan is an independent anthropological linguistics researcher based in Hong Kong. He has conducted a collaborative project on documenting the world’s languages with the Department of Linguistics, Max Planck Institute for Evolutionary Anthropology, Leipzig, Germany from 2006 to 2015. This collaboration has resulted in a website that contains data of numeral systems from over 4300 languages around the world (https://mpi-lingweb.shh.mpg.de/numeral/).

Currently Dr. Chan continues to work with, and host the website at, the Department of Linguistic and Cultural Evolution, Max Planck Institute for the Science of Human History in Jena, Germany.

It is important to document the numeral systems, according to Dr. Chan, because not all of the existing 7000 or so languages will survive in the next century. Languages are “cultural treasures of humanity” and the phenomena of numeral systems in languages “reflect the diversity and different development steps of human counting concepts”.

At the end of the Brown Bag seminar, Dr. Chan had a discussion with audience who were interested to collaborate with him further. The Brown Bag was attended by academic staff, students, and members of the public, as well as related organisations such as SIL Sabah.

The Brown Bag Seminar Series features local and international speakers sharing and highlighting their research in the fields of languages and linguistics - two very rich sources of research data on Sabah's indigenous communities.