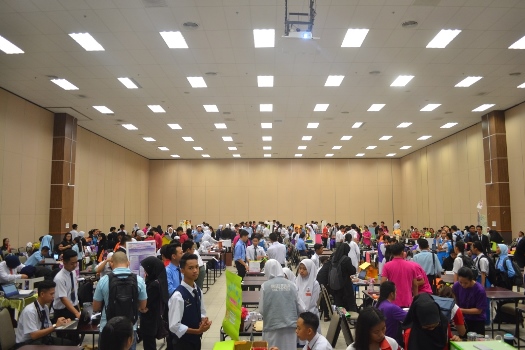 MONDAY, 20 AUGUST -  414 students forming 138 teams from 34 secondary schools in Sabah and 4 from Labuan gathered at Universiti Malaysia Sabah on Saturday to compete in the Young Innovators Challenge Program, a concerted effort between the University Malaysia Sabah (UMS) Digital Maker Hub and Centre for Industry and Community Network, the Ministry of Education (MOE), the Hap Seng Group, Yayasan Sime Darby, the Malaysian Digital Economy Corporation, and Chumbaka, a pertinent training provider in technology industries.

The competition, which was previously known as the Young Innovate Competition, was held for the third time in Sabah.

In 2016, the top 3 teams that won the competition went on to the National competition, where SM St Michael emerged as the national champions with their egg incubator invention “Chick It Out”.

As part of their championship award, they won a trip to the Singapore Maker Fair.

In 2017, the state level winning team from SMK Tun Fuad Stephen Kiulu went on to win the Gold Medal in the MDEC Innovation.

15 teams nationwide will be selected for the YIC nationals in September. The Gold Award winners will stand a chance to be shortlisted to represent Sabah in this national event.

This Young Innovators Challenge competition encourages high school students to use an embedded system such as Arduino, to solve a community problem.

These students were mentored by UMS students or teachers trained by the Hap Seng Group.  During the competition, the students come up with many conceptual ideas and produced numerous prototype projects.

They also develop programming, design, and engineering skills.  This competition falls under the Digital Maker Hub @ UMS Sabah, which is responsible for running programs on computational thinking and programming for teachers and students.

The objectives of this program are to inspire passion in Science, Technology, Engineering and Mathematics (STEM), to develop living skills such as problem solving, design thinking, persistence, and collaboration, to inspire life-long learning through the use of open-source materials.

The key funding raised by the UMS students and organisers for the Arduino kits as well as the competition were raised through generous contributions of the community donors, the Hap Seng Group, Chumbaka, the Malaysian Digital Economy Corporation, and the Centre for Industry and Community Network, Universiti Malaysia Sabah.