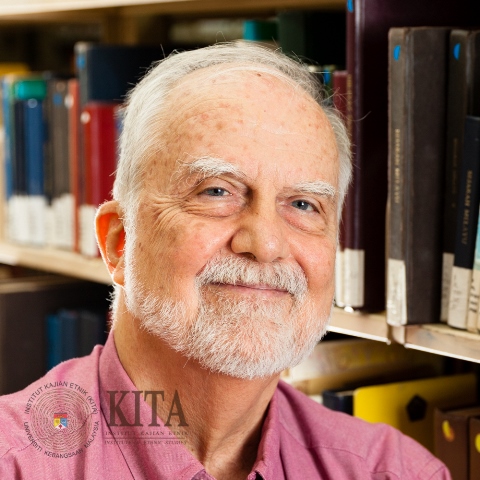 MONDAY, 31 DECEMBER - According to the Ethnologue, 7,097 languages are spoken in the world today, but that number is always in flux depending on the survival of each language as “roughly a third of the languages are endangered”. 2018 has been a great year for languages and linguistics for RULLS specifically and for UMS in general. Since starting its operation on 1 Feb 2018, RULLS has worked to spread the message that UMS is on point to state that this university is relevant and a reference in the niche areas of languages and linguistic. Hence, it was apt that RULLS conducted its first workshop on the eve of the 2nd International Conference on Languages, Linguistics, and Society on 7 Nov 2018 with the title ‘Language Revitalization and Documentation’. The 1-day workshop was led by renowned linguist, Emeritus Professor Dr. James T. Collins, from the Institute of Ethnic Studies (KITA), Universiti Kebangsaan Malaysia.

Officiated by the Dean of PPIB, Prof. Dr. Jualang Azlan Gansau, the workshop was attended by about 40 local and international participants and held at the Bilik Mesyuarat Utama, PPIB. It was organized by the pre-conference workshop committee led by Dr. Jane Wong Kon Ling, who is also the Coordinator for the Brown Bag Seminar Series for Languages & Linguistics.

Emeritus Professor James T. Collins has been a Principal Research Fellow of the Institute for Ethnic Studies (KITA), Universiti Kebangsaan Malaysia, since 2013. His principle interests are Austronesian historical linguistics, Malay dialectology, the minority languages of Maluku and Borneo/Kalimantan and the social history of Malay.

Fluent in Malay as well as Indonesian, Professor Collins has authored twenty-five books in Malay, Indonesian, and English. His award-winning book, Wibawa Bahasa Melayu: Kepiawaian dan Kepelbagaian (1999) has been reprinted twice, the latest in 2016. The third expanded edition of Malay, World Language: A Short History, was published in 2018. His most recent book is Bibliografi Dialek Melayu Semenanjung Tanah Melayu (2018); this Bibliografi completes a series of five bibliographies covering Malay dialects throughout Southeast Asia.