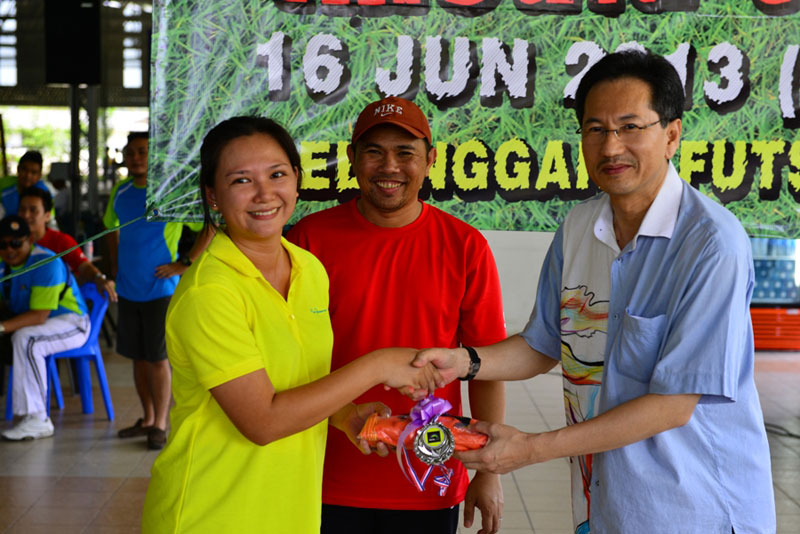 MONDAY, 17 JUNE – KKFM once again was in the spotlight among media and local arts enthusiasts through the Media and Celebrity Futsal held at the Yayasan Sabah Futsal Arena.  Now in its third year, this event saw 17 teams taking part in the programme organised by Universiti Malaysia Sabah (UMS) Campus Radio yesterday.

The programme was attended by the Vice-Chancellor of this EcoCampus University, Prof. Datuk Dr. Mohd. Harun Abdullah who described the event as a good platform to enhance closer rapport with the community especially the media and local arts enthusiasts.

“This is a good programme, not only is it a healthy activity but it also enhance closer rapport amongst us; UMS always support such programme,” he said in his speech where he later presented prizes to the winners.  He also recorded his highest appreciation to all parties involved in the organising of the programme.

In the championship, Clown Team Sabah emerged champion for the male category after beating Pentarama team at the finals with a score of 2-0 through penalty kicks.  Pentarama had to be satisfied with second placing, while the third place went to New Sabah Times team.

For the female category, Clarice team emerged champion when they collected the highest points, followed by the team from the Sabah Cultural Board and KKFM FC third placing.  Also joining in the competition were Utusan Borneo, Frontman Company, BPK FC, Online FC besides other teams. – FL