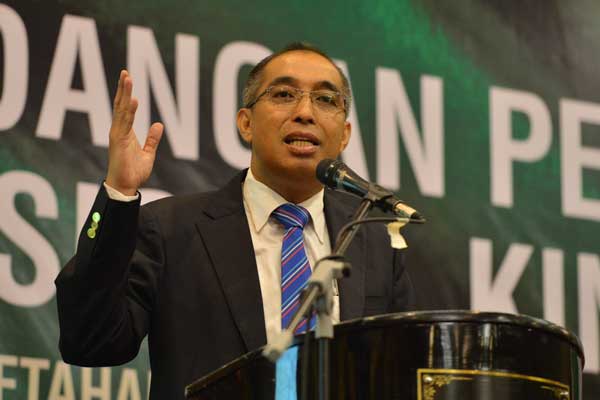 WEDNESDAY, 18 JUNE – Sabah State Assembly Speaker, Datuk Seri Panglima Dr. Salleh Tun Said Keruak today said that the aspect of human capital played an important role in the administration of an organisation.
He said that investment in human capital should be a priority in an organisation to be able to draw attention to value which could be emulated by others.
“The human capital framework has to be well-generated from an early stage because it is through this that each step and direction be envisioned and plans implemented,” he said.
He was speaking at his keynote address entitled ‘Strengthening the Resilience of Human Capital, Strengthening Governance’ in the 3rd Kinabalu Management and Professional Conference 2014 organised by Universiti Malaysia Sabah (UMS) at Promenade Hotel, Kota Kinabalu.
He explained that the government’s efforts in strengthening the country’s human capital, education and training are the foundation of success towards a more excellent development.
“Through education and training, not only one’s potential can be developed but also knowledge and other skills can be indirectly incorporated,” he said.
The government’s efforts in human capital development agenda can also be seen when it was made into one of the key elements in the 9th Malaysia Plan (9MP).
At the conference, three papers were presented before the 200 participants comprising government and private service officials across the country. Also present was the former State Secretary of Sabah, Datuk K.Y. Mustafa. – ZMD (fl)